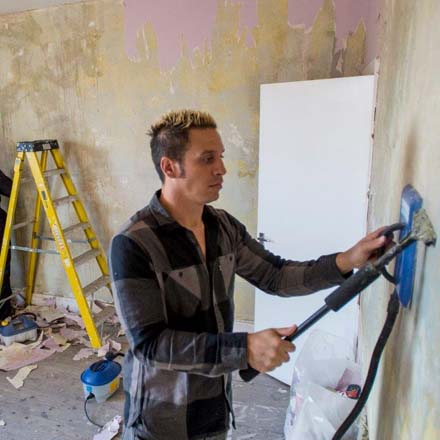 In September 2016 a group of 12 practitioners from around the world visited our 2015-16 World Habitat Award winner Self-Help Housing in the North of England, run by two charities known as Canopy and Giroscope based in Hull and Leeds, United Kingdom. During this week long peer exchange participants learnt more about the work of these two organisations, including their self-help housing model, volunteer engagement and financial systems. Photos of the UK Peer Exchange can be found in our Facebook gallery here.

Inspired by this peer exchange, participant Chris Lambert from Life Remodeled, a non-profit based in Detroit, USA, has recently implemented some of their practices into his organisation’s work. Life Remodeled works similarly to Canopy and Giroscope engaging volunteers to renovate dilapidated neighbourhoods in Detroit.

Motivated by Canopy’s success in gaining ‘peppercorn’ leases (nominal £1 a year leases) for some of their properties from Leeds City Council, Life Remodeled has succeeded in negotiating and securing a $1 renewable lease on the Durfee Middle School building for the next twenty years.  They plan to transform it into a Community Innovation Centre which will partner with Detroit Central High School to provide new learning experiences and career pathways for students.  Using volunteer labour and money from fundraising, the school will be redeveloped after it is handed over to Life Remodeled in June 2017. The innovation centre will serve as a hub for the whole community and will provide opportunities for creativity and resource sharing for local businesses, entrepreneurs, students and community members.

Chris, from Life Remodeled, said, “When I learned about Canopy acquiring properties for £1 a year, I thought, ‘That’s the kind of deal we need in Detroit!’  One thing led to another and now we are investing in our largest and most impactful project yet.”

If you’ve been on a peer exchange or study visit to a World Habitat Award winning project, please share with us your stories of its impact on your work.

Our next peer exchange is to Caño Martín Peña Community Land Trust, who also won the World Habitat Awards in 2015-16. Follow us on Facebook and Twitter for updates.