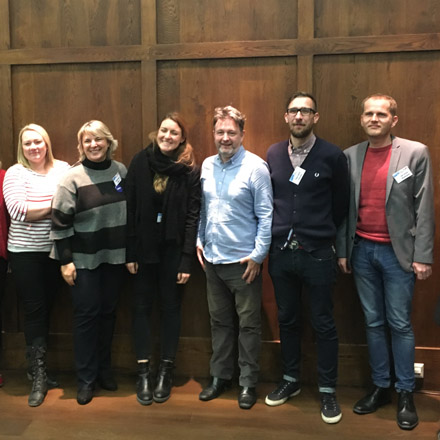 The event also offered the chance for three new cities to formally join the campaign – Athens, Bratislava and Sheffield. This means there are now 13 cities working together to end street homelessness.

Each city brings vastly different contexts but share the belief that change is possible.

In Athens the exponential growth of street homelessness in the last decade has been an inevitable consequence of the economic downturn in Greece. Furthermore, an increasing number of refugees and migrants mean that resources and facilities are already stretched to deal with homelessness. There are no state programmes which directly work to fight homelessness. We are excited to have Emfasis Foundation on board as leaders of the Athens campaign. Their work is focused on street outreach and they already involve large numbers of volunteers in this work.

Homelessness is not legally defined in Slovakia meaning that homeless people there are not recognised. In Bratislava there are approximately 3000 street homeless people, many of whom have been living on the streets for years.The response to homelessness is significantly under resourced and there is no tradition of solutions such as social housing. Stopa Slovensko, which works to help homeless people off the street through various initiatives including work and volunteer programmes, will lead the campaign. They have support from the Social Services Department at the Municipality of Bratislava.

Sheffield has had a growing homeless population in recent years. From June to November this year over 400 different people engaged with the city’s street homelessness team and identified as being street homeless for at least one night. Roundabout Sheffield is a youth homelessness charity providing shelter, support and life skills to young people aged 16-24. They will be working to build a coalition with other organisations in the city to work on the campaign together. There is already lots of public support to end homelessness in Sheffield, so it is hoped this can be built on through the campaign.

Follow us @WorldHabitat and through the hashtag #endstreethomelessness for news of all the cities in the campaign.

7 hours ago ⭐️𝙒𝙀𝙀𝙆𝙀𝙉𝘿 𝙍𝙀𝘼𝘿𝙄𝙉𝙂⭐️ All 10 of our European End Street Homelessness partners met recently for our ‘Annual Gathering… https://t.co/too7p7KRDB

1 day ago ⭐️𝙒𝙀𝙀𝙆𝙀𝙉𝘿 𝙍𝙀𝘼𝘿𝙄𝙉𝙂⭐️ 'Anyone can make a difference’ was a key message at the recent #WorldCLTDay2022 & to put the i… https://t.co/vGRRWCwwtN