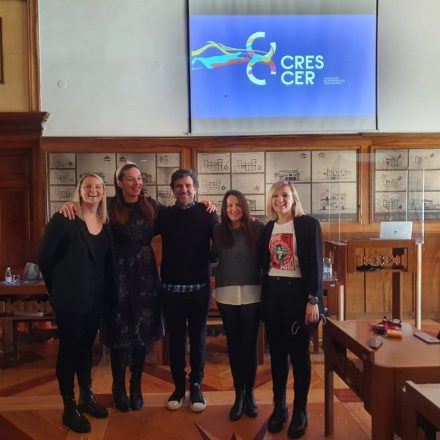 Croatia is a nation of homeowners, with a very small social rented sector in the major cities, and no national requirement for the provision of general social housing. Official homelessness figures, based on the letter of the law, of 2,000 nationally are considered to significantly under-represent the true picture. Due to the pandemic, the number of people experiencing homelessness has increased, with many at risk due to losing their jobs.

Recently, in the historic port town of Pula, there have been additional concerns about a group of more than 80 people, many of them vulnerable, being evicted from a dockyard development without resettlement options in place.

This backdrop made it very timely for the first major event in Croatia on developing a Housing First approach to be held in Pula’s City Palace in April 2022.  Twenty-five key stakeholders from the local Municipality & NGOs and across Europe came together to share knowledge and experience and discuss how to take forward this important and sustainable solution to homelessness.

Organised by Red Cross Pula, in partnership with the City of Pula and the Croatian Network for the Homeless, the event was hosted by Pula’s Mayor Dr. Sc. Filip Zoričić, Deputy Mayor Dr. Sc. Ivona Močenić dr. med, and Ivana Sokolov, Head of the Administrative Department for Social Activities and Youth.  Welcoming the delegates, Ivana Sokolov, a driving force behind this ground-breaking event, said:

Samara detailed the strong international evidence base that consistently demonstrates Housing First is an effective solution to homelessness.  It works for people with a history of sleeping rough and managing complex needs, greatly reducing the chance they will remain homeless.  80 to 90% of tenants successfully stay in their Housing First programmes.

“Cities have a crucial role to play in implementing Housing First – & the local Municipality here in Pula can be real leaders in this field.”  Samara Jones

The CRESCER Association has 21 years of experience working with socially vulnerable groups. In 2013 they launched a two-year pilot project with seven housing units, which grew to 120 housing units by 2022. Using a Housing First approach has resulted in 90% of the users of the service not returning to homelessness.  Their ten-year evidence base demonstrates that Housing First:

As a result of the event, a number of exciting options are being taken forward. The local lead NGO, Red Cross Pula, is sending team members to be trained by the Housing First Europe Hub to support the roll out of a local approach to Housing First.  And plans are now afoot in Pula’s leading-edge Municipality to secure funding to pilot Housing First in the city – a first not just for Pula but for Croatia as a whole!

Lisbon’s CRESCER, along with the Croatian Network for the Homeless / Hrvatska mreža za beskućnike, are both members of the European End Street Homelessness Campaign.   The Campaign is a network of local city campaigns, all working with the same set of principles to end street homelessness in their communities. World Habitat hosts this growing movement of committed and passionate housing advocates – championing permanent housing solutions and fighting for an end to street homelessness.  The Campaign helps every city share what they are doing and learn from others from across the world.