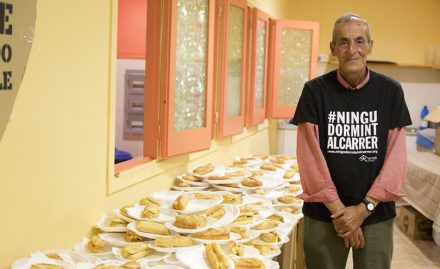 Not many of us experience a lightbulb moment in our working lives, one that triggers a positive shift in our professional ethos. But thanks to a trip to Helsinki with World Habitat in 2015, UK homelessness expert Matt Downie encountered exactly such a pivotal event.

Downie, then policy and external affairs director at Crisis and now its chief executive, was in the city to learn about the innovative Y-Foundation. World Habitat had recognised the Finnish specialist housing association’s work with an award in 2014 and decided to further champion its approach the following year by taking a group of housing practitioners to Helsinki.

The foundation was an early adopter of the US-born Housing First model, which offers homeless people unconditional housing with tailored support, instead of the ‘treatment first’ staircase model to accommodation. It was the first time that many of those present were introduced to the concept of Housing First and its principle of the human right to housing.

What Downie learned radically changed his approach to homelessness, forming guiding principles that shape Crisis’ approach today. He noticed there was not a single rough sleeper in the city, realising that a solution was “totally possible, not a pipe dream, not a utopian ideal”.

Downie consequently became a leading proponent of Housing First in the UK, as evidenced by Crisis’ recent Home for All campaign which argues for scaling up the method in England. Downie says: “My field of vision before that trip wasn’t wide enough. That visit changed my professional life.”

It is a timely moment to explore the impact of that seminal exchange seven years ago. With more than 700,000 people homeless in Europe on any given night, the challenge is exacerbated by the most serious refugee crisis since World War Two. Social and economic inequality is also on the rise, and demand for support is increasing without the necessary additional funding for social policies. Europe  also faces fresh challenges with the cost of living crisis.

David Ireland, World Habitat chief executive, says: “Many factors are looming across Europe to make more people vulnerable, to cause more of them to lose their homes and to make people less likely to be able to afford decent homes. Housing practice and policies need to adjust to that.”

In its work to highlight successful practice and policies, Ireland says Word Habitat has a role “as a catalyst, looking for solutions and helping them grow and transfer”. It was vital, says Ireland, to share the Y-Foundation’s approach in order to promote a deeper understanding of the needs of homeless people as individuals. He adds: “In Helsinki, it was clear that homelessness is viewed a solvable problem and this solution had been going on for years and was now government policy. So, if you can get some of that ethos and policy introduced elsewhere in Europe, you can begin to effect change. That’s what we sought to do.”

As Ireland and Downie both explain, Finland has proved homelessness can be solved. It is the only EU country where homelessness is falling (from around 20,000 in the 1980s to just over 4,000 in 2021). The Y-Foundation develops and leases affordable social housing with tailored support for tenants, without preconditions. It builds consensus among state, municipal and non-governmental organisations for the principle of the human right to housing.

For Y-Foundation chief executive Juha Kaakinen, the recognition from World Habitat though the award and related visit sparked “a growing awareness” internationally of the Housing First movement. Since the exchange, for example, “there has been much more public discussion of housing as a basic right”. Kaakinen says being in the spotlight was partly “a catalyst” for the 2016 establishment of the Housing First Europe Hub, the network that aims to scale up the method: “It showed the importance of this kind of cooperation and exchange of information.” The hub has just held its inaugural conference.

The connections Kaakinen made via World Habitat mean he has a lasting international peer network. He says he also learned that, despite huge interest in the Finnish model, there was healthy skepticism about replicating it elsewhere. This is understandable, given differing social and public sector systems across Europe and varying degrees of collaboration between stakeholders in each country. He says: “It made us understand the different perspectives…The exchange showed us that we have a very different culture of collaboration in Finland between different organisations, like state authority, municipalities and non-governmental organisations.”

The knowledge transfer sparked by the 2015 visit also drove the formation of the World Habitat’s European End Street Homelessness Campaign (EESH). The campaign was inspired by the work of the Y-Foundation and its fellow 2013 World Habitat Award-winner, 100,000 Homes, the USA-based Housing First advocate.

Ferran Busquets, director of the Arrels Foundation in Barcelona, one of the original members of the EESH campaign, was also on the 2015 Helsinki visit. Busquets says: “The campaign and the exchange are linked because of the swapping of information and best practice.”

Arrels is now a leading promoter of Housing First in Spain. It already had Housing First on its radar in 2014, but seeing it first-hand strengthened the organisation’s resolve. Busquets says: “The first thing when you have a problem [like homelessness] is to recognise that others have that problem…to know that maybe it’s something that could be solved.”

Busquets also says that what he learned opened his eyes to the true value of evidence-based, data-driven solutions. Driven by the aim of gaining this deeper understanding, Arrels began completing Connections Weeks registry weeks, detailed surveys into the needs and backgrounds of people sleeping rough. Before this, local street counts were effectively just a numbers tally. Gathering hard evidence and human detail about the lives of those on the street has helped to challenge preconceptions about homelessness, boost public awareness and influence national policy.

“The real big change for us was Connections Weeks registry weeks,” says Busquets. “Introducing them made people realise that first, we can have really precise information on what’s happening on the street. And second, we introduce a change in culture among [housing and welfare] staff because they realise the importance of evaluation tools and data.”

Since the 2015 visit, developments in Barcelona include Arrels’ Flat Zero project which offers rough sleepers immediate, emergency accommodation. Aimed at those who struggle to adapt to other housing solutions, including Housing First, the 10-bed space opened in 2017 and is open only at night. In 2018, housing practitioners in Bratislava asked World Habitat to support a visit to Barcelona [page 26] so they could learn more about Flat Zero. They have since developed a training flat model, inspired by Arrels’ work.

While Busquets has been a leading champion of Housing First in Spain, Crisis’ Matt Downie has taken on a similar role in the UK. Downie recalls of the trip to Helsinki: “Once I got back, I realised that if you put that Housing First approach together with the preventative agenda on homelessness, then that’s your answer.”

The first practical action he took as a result was “telling lots of people that they really must go and see what the Y-Foundation was doing”. Downie also encouraged the media to cover the approach: “I was keen to do was to make sure others were describing it, that this homelessness breakthrough wasn’t just hidden in the experience of people who’d been there.”

Downie was the main author of a 2018 Crisis report on ending homelessness that called for not only a national Housing First infrastructure, but also a director and local targets. Crisis has carried out feasibility studies for local areas to show how to deliver the approach. The charity’s Home for All campaign calls for a renewed strategy that prioritises housing, giving people the support they need to keep a home, starting with the rollout of Housing First. Without this, Crisis says the UK government will not meet its manifesto commitment to end rough sleeping by 2024, despite Housing First pilots announced by the government in 2017.

Back in 2015, Downie’s fellow housing expert, Ninna Hoegh, director of homelessness nonprofit Project Udenfor, said that the Y-Foundation “has shown there is a way – we need now to find a will”. At the time, she described what she saw then as “courageous people taking action – and succeeding”. Hoegh’s words have proved to be prophetic, not least because the inspiration she found in Housing First in Finland fed into Denmark’s decision to mainstream the approach.

As for where the collaborative and information-sharing approaches promoted by World Habitat are leading next, Finland’s Kaakinen is optimistic. He says: “Homelessness is an issue that can be solved and eradicated completely…I’d like to see Housing First established as European Wide policy”.

World Habitat’s David Ireland shares Kaakinen’s positive vision for the future while underlining the need to make inspirational approaches more widespread. Ireland says: “It’s not the case that we’ve got everywhere to the stage where Finland was back in 2015, but the ideas and practice are more widely known and more mainstream in more countries.” Homelessness will not end, he adds, “until what we think of as innovative now, becomes the norm everywhere”.