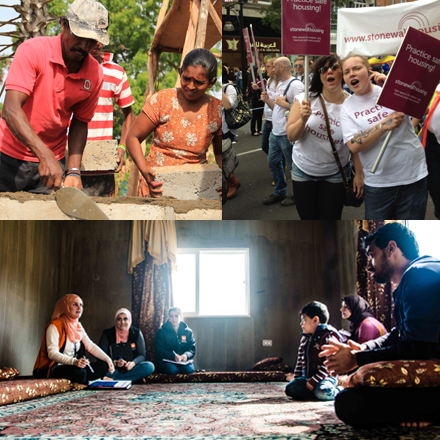 Inspiring housing projects which improve the lives of vulnerable people feature in the final 12 of this year’s World Habitat Awards.

The ’50,000 Houses for War Victims’ programme in Sri Lanka funds and builds houses for people displaced as a result of the civil war. With a large majority of these houses being self-build, it is a people-led approach to supporting community development for vulnerable people.

The ‘Urban Shelter Project’ in Jordan focuses on victims of war but this time concentrating on the immediate needs of Syrian refugees. The Norwegian Refugee Council, a non-governmental organisation, works with Jordanian owners to refurbish previously uninhabitable properties to create medium-term rent-free homes for refugees. Not only does this meet the housing needs of vulnerable people, but it also provides long-term investment for the host community and encourages social cohesion between different groups.

‘Stonewall Housing’ provides the UK’s only housing advice, advocacy and accommodation specifically for LGBT people. As a community that is frequently discriminated against in different housing settings, the project develops awareness and procedures that create equal access to services. People who are especially vulnerable to double discrimination, such as LGBT refugees and migrants, are supported to overcome the barriers faced in finding housing.

These projects have all been selected as finalists in the 2016-17 World Habitat Awards for their innovative ideas in supporting vulnerable people into housing. The two winners will be selected from the final 12 in early 2017.