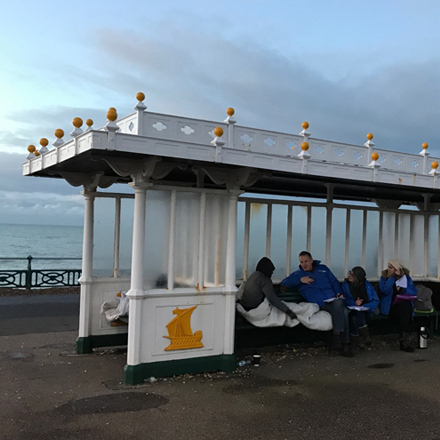 Almost one in five people sleeping on the streets of Brighton and Hove are in paid work. This is one of the headline findings of a recent Connections Week, organised and led by GalvaniseBH, as part of the European End Street Homelessness Campaign, which is co-ordinated by World Habitat.

During the Connections Week, over 100 volunteers met and spoke to people who are sleeping rough in Brighton and Hove about their situation and hopes for the future to ensure services and support meets their needs. An Interim Report has been published, which shows the results of surveys carried out with 125 homeless people. In addition to the numbers who are in work, it was also found that:

GalvaniseBH have now formed Ambition Development Groups which are focused on specific areas of work that will progress throughout 2018.

“These figures from the surveys provide a stark reminder of the challenges ahead and the desperate need for GalvaniseBH and the people of Brighton and Hove to work together. It is so encouraging to see their determination to keep making progress on their goal to ensure no-one is sleeping rough in Brighton by 2020. Based on their work so far they are a step closer to finding homes for people that are so desperately needed.”

1 hour ago RT @PatrickDuce: Find out more about the network, and how you can join - https://t.co/EEmndNEN1a

2 hours ago It is with delight today that we can say @OzStopa Director, Pavol Sabela has deservedly become the first social wor… https://t.co/EB8lteL1oo