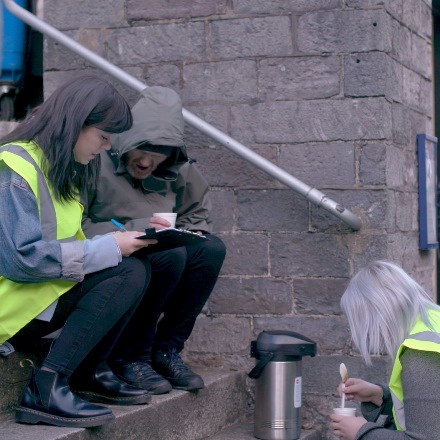 Local people and organisations in Torbay have been working together to tackle street homelessness, and have now successfully helped 8 rough sleepers move into permanent homes. This is part of the ongoing work within the European End Street Homelessness Campaign.

In April local people went on the streets to speak with and listen to those who are sleeping rough as part of their campaign ‘Connections Week’. During that time 25 volunteers from the local community found out about the needs and aspirations of 29 rough sleepers in the towns of Torquay, Brixham and Paignton (known collectively as Torbay in Devon, England).

The volunteers gained deep insights and important information through a survey done with individuals who were sleeping on the streets. This has helped Torbay to find out more about who is sleeping rough and to prioritise helping people into permanent homes.

Torbay’s street outreach team are now working with the other rough sleepers found in the week to help them move into a home.

Torbay has successfully worked with many different organisations to act swiftly to help people find their own home. The campaign is jointly run by Torbay Council, Shekinah (a local homelessness charity) and Westward Housing (a local housing association), and there are now seven other organisations involved, including day centres, local homelessness charities and the police.

‘The people and organisations involved in the Torbay campaign have shown that we can make a difference when we listen to homeless people themselves, and then all work together to tackle street homelessness in our communities.  The Torbay community has made real achievements in a short space of time and World Habitat, as the coordinator of the European campaign, is delighted to hear that 8 people who have been sleeping rough have now been helped into suitable housing.’