Home / News / News updates / How do we end homelessness?

How do we end homelessness? 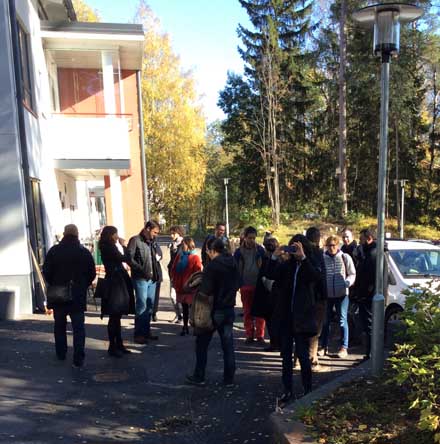 We are never far from homelessness, even in the most affluent of countries. In this context, learning from countries who have developed effective methods for tackling homelessness is imperative.

Finland is one such country, having seen the number of homeless people fall from over 18,000 in 1987 to less than 8,000 in 2014. The number of people sleeping on the street has reduced from over 4,000 to less than 1,000 in that time.  The Y-Foundation, winners of our 2014/15 World Habitat Awards, have played a key role in achieving this, and delivering the national policies aimed at ending homelessness.

In October 2015, World Habitat took a number of people from across Europe to visit the Y-Foundation. This was an opportunity for participants to learn about the processes and actions that have made these achievements possible.

This work is part of our on-going European Campaign to End Street Homelessness, where we are working with six cities from across Europe to test new approaches to ending street homelessness. For more information about this, see here.

20 hours ago RT @SuchiComments: Always a feel of honour & joy when stories of @TheJagaMission are narrated and its spirit is widespread ! @HUDDeptOdish…