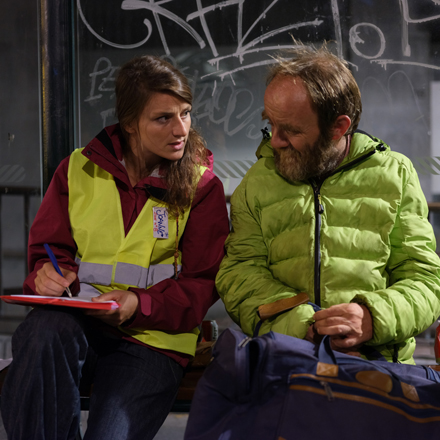 Brussels has taken its first steps to end street homelessness through carrying out their campaign launch and Connections Week as part of the European End Street Homelessness Campaign. Brussels joined the campaign in November 2016, after they had seen a dramatic increase in rough sleeping. Infirmiers de rue, the lead organisation running the campaign in Brussels, have called it ‘400 toits/400 daken’ (400 roofs) in reference to the fact that 400 people were sleeping rough in Brussels in the most recent street count undertaken by La Strada in 2014.

During the three nights of the Connections Week volunteers from diverse backgrounds, ages and professions came together to discover more about local homeless people. Many from the local community had never volunteered before, and wanted to use their time volunteering to challenge their own stereotypes or misconceptions of those on the street. By the end of the week, after hearing homeless people’s stories, many had changed their views and understanding of those sleeping rough, seeing them as individuals like themselves with stories and lives.

Community volunteers met 540 homeless people throughout the week and conducted surveys with 299 individuals. Of those surveyed:

The next stage of the campaign is to use this data to find homes for those on the street through Housing First.

As part of the wider European campaign to End Street Homelessness, representatives from Croydon, Brighton and Valencia attended the week. You can read more about Dave Robinson from Croydon’s experience in Brussels in this blog. Croydon will be holding a second Connections Week in August to continue to build community action in the local campaign CR Zero 2020.